September 15, 2020.    .  I have spent years in a very personal war with the Santa Clara County Sheriff Office,  I have huge issues with Deputies, County and State Officials and I have been in their faces harshly and at times I was harsh with folks that really didn’t deserve that personal touch and the ones that did received a huge dose. Along with Joshua’s case I have never felt ready to step away from this war because officer involved domestic violence needs to be seen but it is not.  .   . I also at the same time do not support defunding or hating all the police because of the crimes of other cops . .Am I angry ?  Over the top Yes but not in the mind set of violent revenge . . .What makes this so extra harsh is that officer involved domestic violence and their victims do not fit anyone’s political agenda in California for Decades now  . . To the Right cops can still be seen as walking on some water at this time in history and to the civil rights Left Joshua is a cops kid while we are left to deal with the criminally corrupt bullshit on our own , No help from the County, State or Federal .   .   . The 1st women Attorney General, Kamala Harris / Democrat refused to address the issues of Joshua’s case and take it from the 1st women Sheriff Laurie Smith / Republican in the Great State of California  . . .There is no protecting the people in California by politicians.  I am not seeing upper management of policing agencies and politicians stepping before the public and taking the blame for undertrained and unfit for street duty cops being on the streets , politicians that created insane laws that protect the bad cop over and over again without getting removed so they had political support from the police unions.   All I am seeing is street cops getting blamed for the mismanagement and while we all burn what do they all have to say ?     . .SILENCE . . .. . .

We must include domestic violence by police in police reforms

BY CAROL WICK AND KIT GRUELLE, OPINION CONTRIBUTORS — 07/02/20 01:30 PM EDT 77
THE VIEWS EXPRESSED BY CONTRIBUTORS ARE THEIR OWN AND NOT THE VIEW OF THE HILL

Behind The Blue Wall

Take a moment to read this site 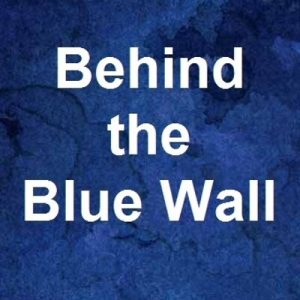 Police Officer Involved Domestic Violence. Lighting a candle of remembrance for those who’ve lost their lives to domestic violence behind the blue wall, for strength and wisdom to those still there, and a non-ending prayer for those who thought they had escaped but can’t stop being afraid. 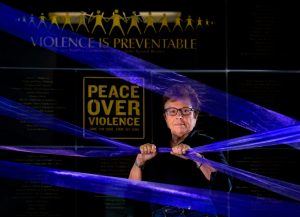 Patricia Giggans, who chairs the Los Angeles Sheriff’s Department Civilian Oversight Commission, was indignant when presented with never-before-publicized details about L.A. deputies with abusive pasts still on the force. 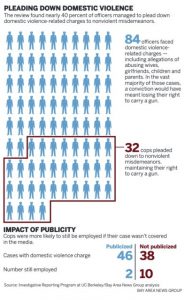 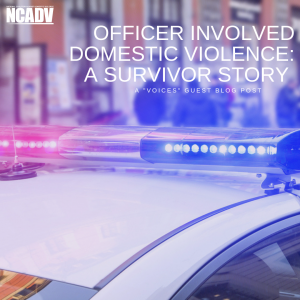 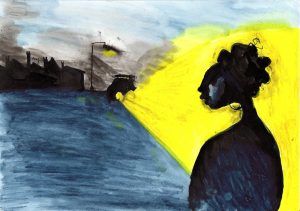 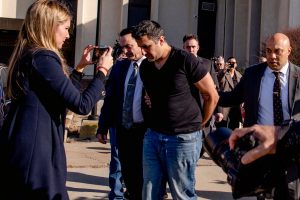 “Get your hands off his mouth”: Audio was captured hours before the boy’s death at the hands of his N.Y.P.D. father, officials said. 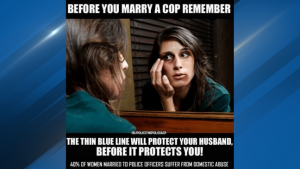 Welcome to the investigative reporting blog of award-winning journalist Alex Roslin, author of the book Police Wife: The Secret Epidemic of Police Domestic Violence. Roslin was president of the board of the Canadian Centre for Investigative Reporting 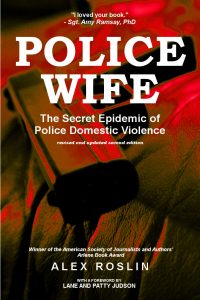 In 1998, the Federal Bureau of Investigation organized a landmark conference on police spousal abuse at its Behavioral Science Unit in Quantico, Virginia.

There was also a breakthrough at the International Association of Chiefs of Police, based in Alexandria, Virginia. In 1999, the group developed a zero-tolerance “model policy” on abusive cops that it recommended for adoption by its 19,000 member chiefs in 89 countries. The policy calls for:

While all this was happening in the US, things have been strangely silent north of the border. No one has studied how widespread police spousal abuse is in Canada, and no studies seem to be in the works. 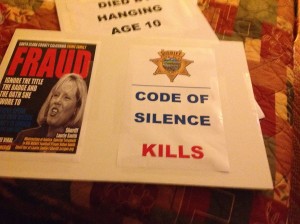 OFFICER INVOLVED DOMESTIC VIOLENCE AND WHAT YOU SHOULD EXPECT WHEN ENTERING THE FAMILY COURT AND LEGAL SYSTEM WHILE TRYING TO PROTECT YOURSELF AND YOUR CHILDREN – For all women who step into the system to deal with a domestic violence issue the experience is harsh and painful to stand before the law trying to protect their children while also expecting this system to protect them. When you are involved in Officer Involved Domestic Violence,  after a while you find yourself standing alone with no expectations of any kind of help offered to others in society. I know from what we experienced with Joshua’s case that expecting protection one finds themselves feeling lost and confused as to why the legal system you are standing before is more intent on putting precious time into protecting your abuser’s law enforcement career then the bruises on your body or your children’s bodies and the mental health issues that come with those bruises and as time slides by in the court system you sink deeper into a void where you feel alone even with your attorney by your side. .

I know many women experience the police removing their abuser from the home most likely for a short time to the horror of the abused and many years ago the police would arrive to a domestic violence call, one officer would talk to the women being abused and the other officer would pull aside the abuser and as a tag team they would talk each of them down and drive away leaving the abused women with her abuser standing a few feet away from her and I could only imagine her loud pounding heart.    .The laws have changed over the years and the police do not need to walk into a room seeing a women getting beat to arrested such a man who would beat his wife and children but when it comes to officer involved domestic violence our Country often follows the old rules and these women are left in their driveways standing feet from their abuser, a cop, a sheriff deputy, a highway patrol officer . . as they stand in fear for themselves and their children as their abuser’s co-workers pull out of their driveway . . At that moment I think a women would feel Hell slapping at her heels. .and into God’s hands you will step for the protection you are longing for and not getting from a legal system made to protect their own first.  It was this way in the 80’s and long before and from what I have read the issue is still a huge problem and dealt with in that silent way Upper Management has of dealing with their domestic violence officers when complaints come up the chain  .  . I don’t think anything has changed.  I’m a strong believer that if a Law Enforcement Officer is abusing his family that part of a personality steps out into the public.

May 5, 2016 – GOODMARK.FIN (DO NOT DELETE). 3/28/2016 12:50 PM … asserting control over one’s partner may not explain officer-involved domestic violence; intimate partner abuse in law enforcement may be part of a larger pattern of ..

But why would police officers, who are supposed to protect and serve the public, beat, rape, or even kill their loved-ones behind closed doors – at up to 4x the national average? According to the Department of Justice, it’s called Sociopathic Police Personality.

HEARING FOR HOUSE BILL 2712 ON DOMESTIC VIOLENCE BY POLICE OFFICERS

On June 6, 2017, Jay Hoffmeister, a former client of Kafoury & McDougal, stood before lawmakers in Salem in support of House Bill 2712 (HB 2712), which would require domestic violence prevention policies to be adopted by all police departments in Oregon – Posted on June 9, 2017 by K&M Staff 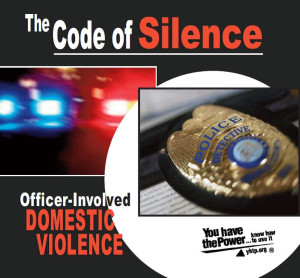 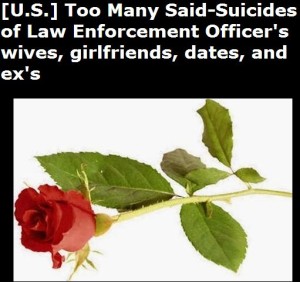 Nowhere to run: Intimate violence and the problem with police

As a victim of a police officer, your situation is very different than that of other domestic violence victims.

Because My Dad’s a Cop…

Anne O’Dell, STOP Domestic Violence
Founded in 1978, LifeSpan is a not-for-profit agency that provides comprehensive services to victims of domestic violence and their children. The Police Domestic Violence Program (known as S.A.B.L.E.) is a unique project that provides specialized counseling, legal, and advocacy services for victims whose abusers are police or other law enforcement personnel. LifeSpan can be reached at online or by calling 1-847-824-4454.

How to Combat Officer-Involved Domestic Violence

First Published June 11, 2018 Research Article
https://doi.org/10.1177/1461355718774579
Brenda L Russell, Nicholas Pappas
Very little is known about officer-involved domestic violence (OIDV). Although the International Association for Chiefs of Police has developed model policies about OIDV, the extent to which agencies adopted these policies across the United States remains unclear. Similarly, research on and attention to OIDV have diminished substantially since the 1990s. Officer training on OIDV is also rare, but pilot studies examining the use of new curriculum show promise. Yet, there is so much more to be done. This article reviews research and policy on OIDV and seeks to provide motivation for uniformity of policy implementation and officer response to OIDV, calling for transparency via research and reporting. 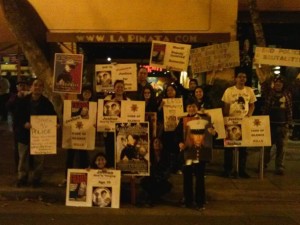 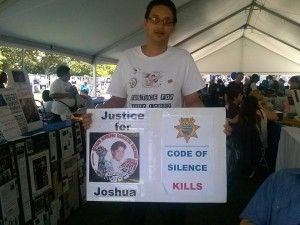 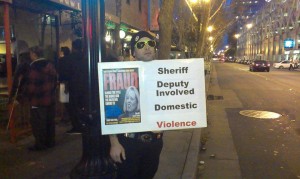 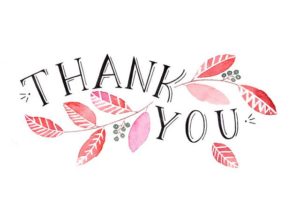